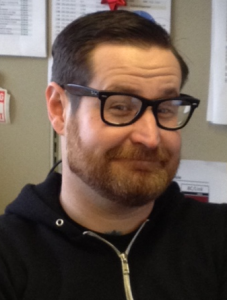 Shaun has been with Eleven for only a year and half and has become an integral part of the team. Stepping up and acting in this leadership role for the past several months; it’s no surprise how quickly he was promoted. Recently promoted from Technical Support Specialist we know he will thrive in his new role of Support Team Lead for all ElevenBC products.

In his relatively short time here Shaun has taken the initiative to become well versed in all of Eleven’s products including our guest Internet management software, ElevenOS. He also acts as a back up for our Senior Systems Engineer. It is a pleasure to have him as a member of the Eleven team.

Everyone at Eleven appreciates Shaun’s welcoming personality and take-action attitude. He never waits for someone else to follow up; he gets to the base of any issue and has a passion to see projects to completion.

Power Animal: A sheagle: half shark and half eagle.

In Part I and Part II of this Conference Internet series, we’ve covered bandwidth allocation and attendee considerations. We identified the key aspects of CSMS, like creating access codes and allocating higher-speed Internet access to specific users based on the size and type of event. In the third and final installment of this series, we will explain additional revenue opportunities for your conference space.

In Part I of this Conference Internet series, Bandwidth Allocation, we examined the function of CSMS as an intuitive software tool for managing and provisioning Internet bandwidth at conferences. In Part II, we will talk about attendee-specific considerations, like doling out access codes, managing role-based permissions, and the proliferation of mobile devices.

Hotels around the country are seeing strong demand for meeting rooms with high-performing networks, and these conferences are generally highly profitable. Even if you offer free Wi-Fi in other parts of your hotel, charging for Internet usage at conferences and meetings can yield high margins.